Charge Of The Midgets pt.2_Cape York on 110cc

Staff member
Think I better start a new thread, the other one's blown out a bit

Sooo…here’s part2 of the yarns.

Much dreaded, much anticipated, some half-arsed planning…and a whoozy feeling in the gut.

All of the previously enthusiastic bunch had pulled the pin for one reason or another.
After the Fraser Island stint of the previous ride (links above) and knowing what’s in store at the Cape, even “Ironbutt”-Goodie had quit “no way, it’s just too much…physically at least, it’s murder!”.

….and, as always, groaaan, she was right on the money!!

That just left yours-truly for the 2770km Cairns-Cape York- Cairns on the
110cc Postie-rocket… no escort, no backup, no help, no fallback but a $25 pre-paid mobile phone which wouldn’t work 95% of the time up there… 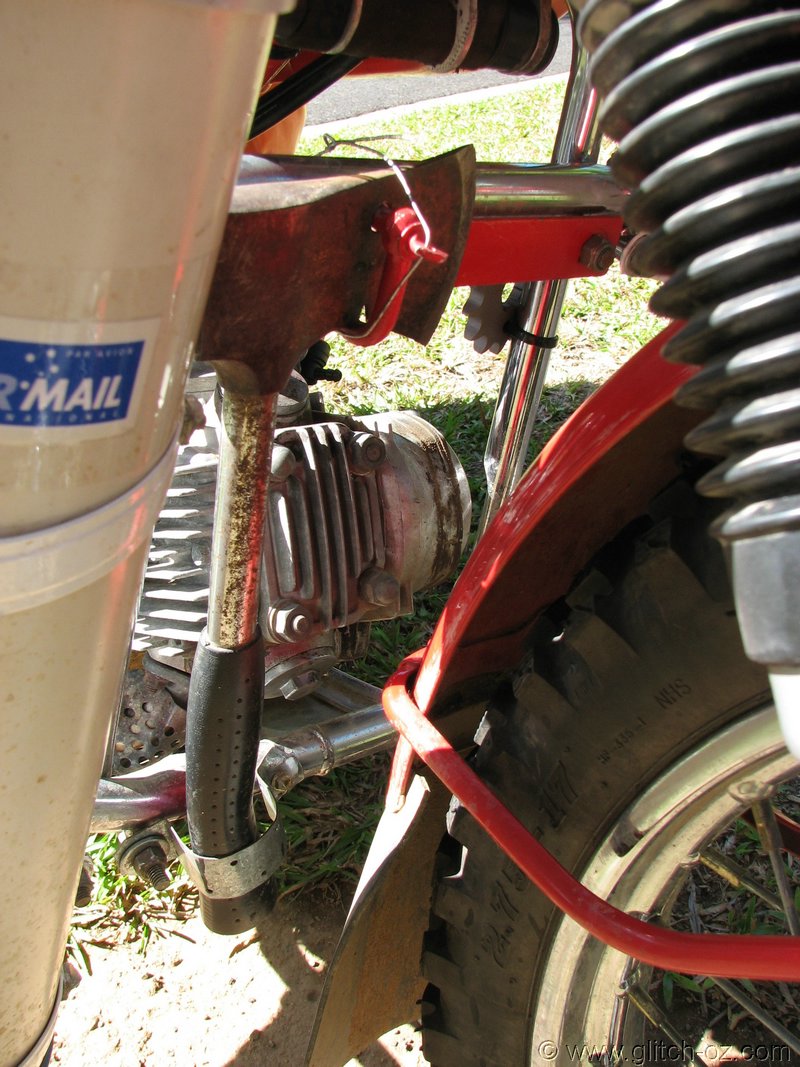 I’m also getting too old for this shit…

Bugger it, it’s been whizzing around my head for years, and this thing is ON!!!!... even if I only make it 50k’s up the road before the little donk falls to pieces…. 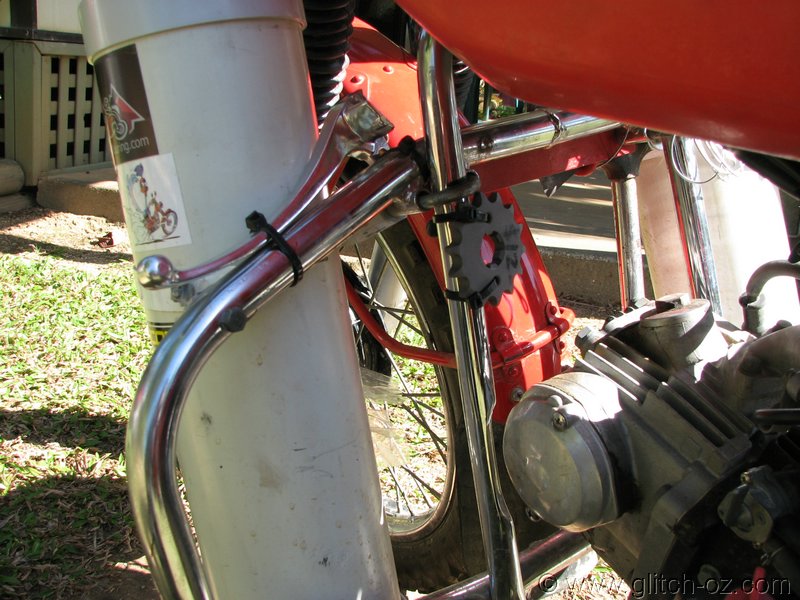 2 months before the date, some emails right out of the blue….and there are 2 other fruitloops who’ve heard of the “plans”

….Glen from Brisbane and Rohan from Hobart.

They both shoot off to the local auctions buying bikes and get knee-deep into the prepping… repair-manuals and pics fly back and forth via a storm of emails to help with the details.

The meet is set for Sat. 23 August in Cairns, I’m flying up a day earlier, getting one of our 2 posties out of storage to get the bike ready, replace the broken spoke from the last day of the previous trip 5 months earlier, stick new rubber on the back and if there’s enough time, cut the knobs of the front-hoop down with the Leatherman to stop the rubbing on the front mudguard-stays

…Rohan comes in the afternoon, Glen the next day.

The last night at home…and Mum’s way of saying” Farewell”….
LOVE YA, mum!! 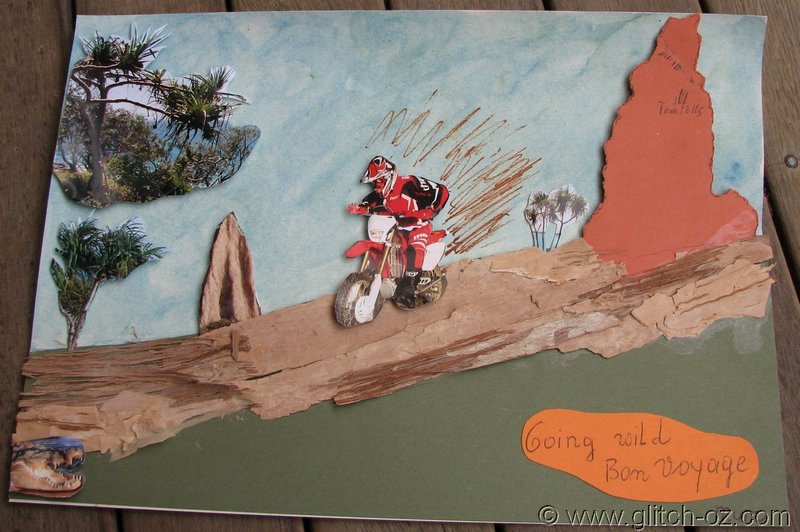 Enough time for Rohan and I to get the bikes out of the warehouse after their transport from respective home-bases.

The previously posted 17kg-box with spares, tools, tyres and other gear had arrived on time, many thanks go to the Coconut Holiday Village for storing it (also through the 3 weeks we spent at the Cape)

Servicing went smoothly, only the fresh rear Vee-Rubber hoop seemed to be the 16.5” racing version… the sucker just didn’t want to slip on despite lots of sweat and swearing and wet soap.

It’ll be a bitch to get off/on having a flat “out there!!”

“G’day” then to Glen’s FNFAST 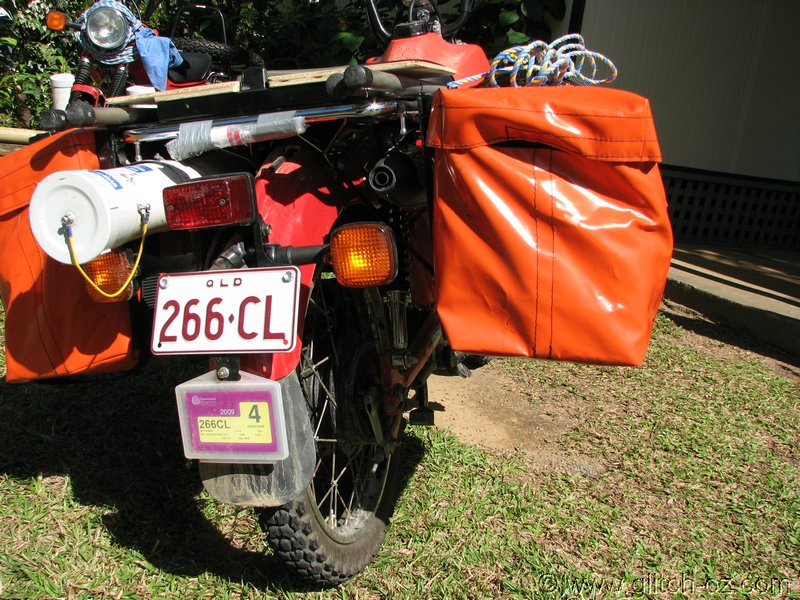 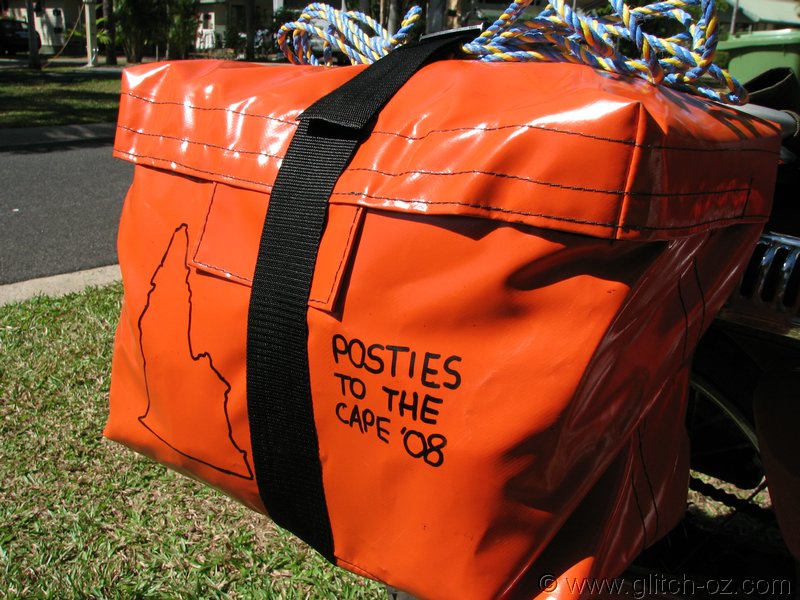 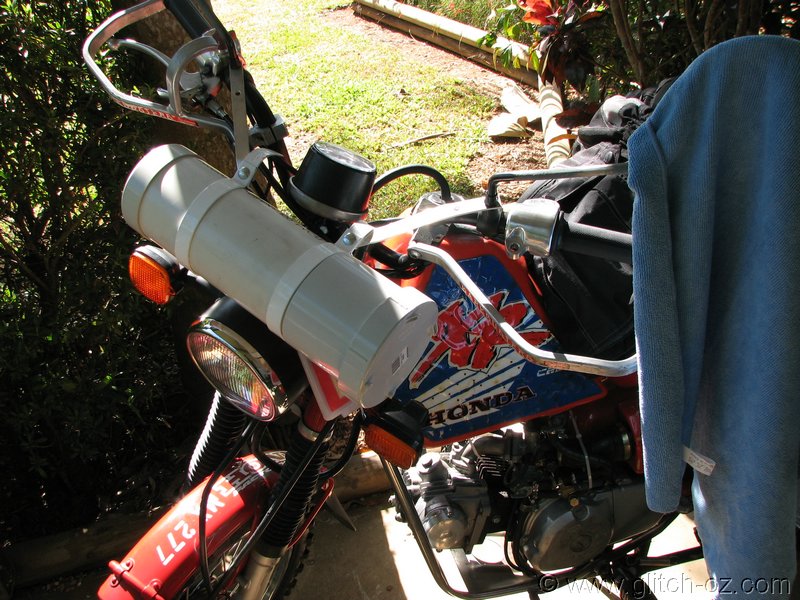 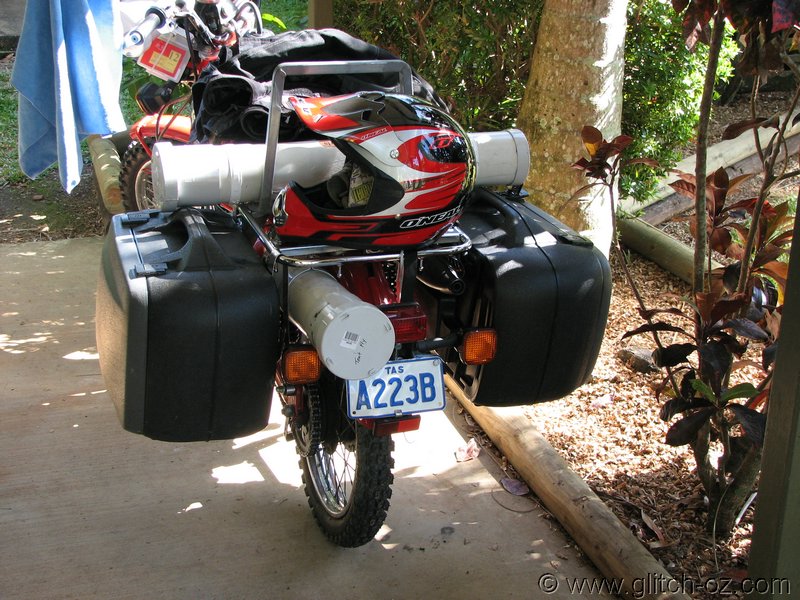 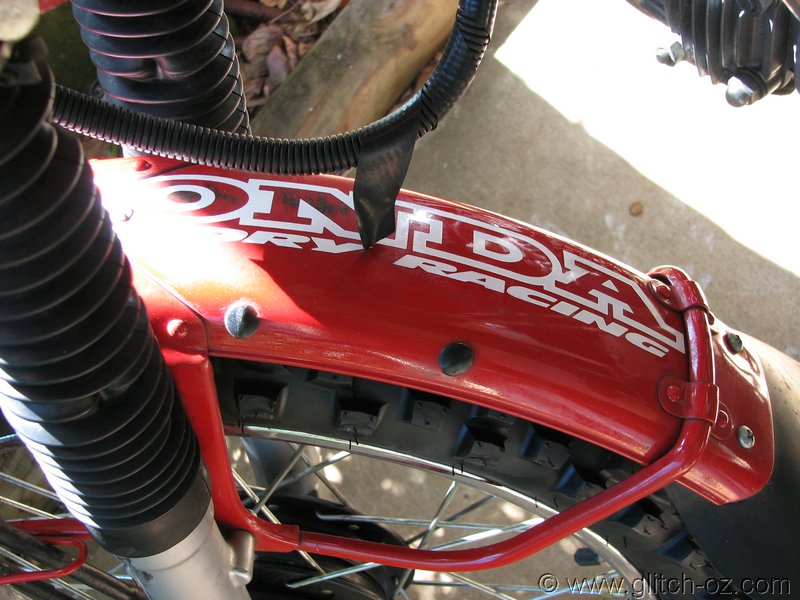 and my own “Plain Jane” with the whining gearbox after the emergency engine swap a few months ago…..and a bastard of a 16.5” rear tyre! 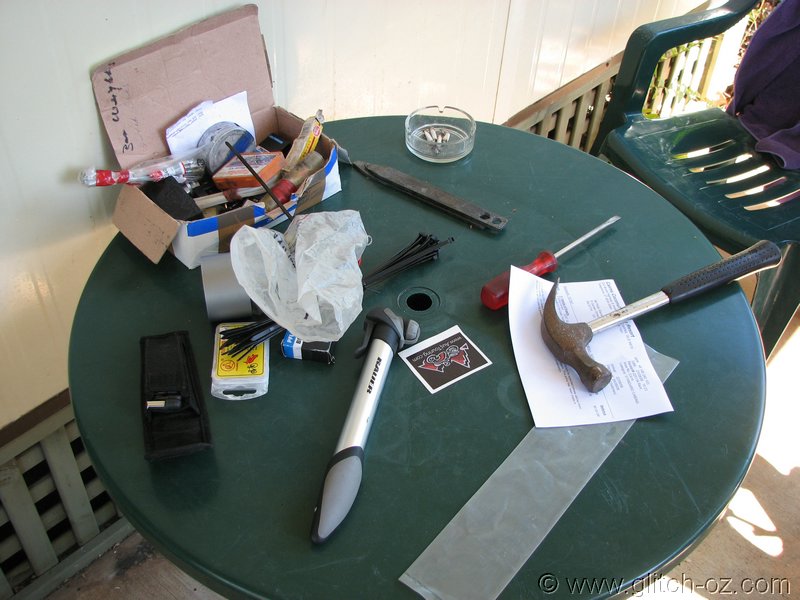 From a freezing cold 4.30am start in Melbourne and single digit temps to 33C around noon in Cairns….welcome to FNQ (Far North Queensland).

Day 1 closes with black fingernails after the servicing, the seafood-buffet at the Coconut Café and a sixpack of coldies

Why doing a Cape Run on Posties?

Cause anything else is for SOFTCOX

wheres the rest of the report

Staff member
Let's have a quick walk around the "contestants"....

Who the feck needs a spare brakelever on a Postie?

The bloody thing HASN'T GOT ANY brakes, the only way to get to a stop decently quick is looking for some sandberm and getting off mid-flight before the family jewels dangle off the handlebars, eh?
Spare spokes taped to the rear bar of the rack...good, that's quick access.
The bags are copies of the original Aussie Post bags with some micro-rack underneath to stop them getting caught in the rear wheel...hey, that'd be ONE decent brake

The folding chair sits underneath the elevated plywood platform, which will carry another bag....
Then there are 2 PVC-pipe "launcher-tubes" bolted to the crashbars, extra storage for food and other stuff...they make great pivot points for the whole bike when going DOWN as the bottoms hit before anything else does!!

The "Factory Racing" model then....

Way more elaborate than the FNFAST, this one flies in style !!!

A set of Honda (Hepco Becker Junior 40) panniers, bought for next-to-nix from some Tassie wreckers....with a couple of metal-hooks riveted to the inside...both panniers flapping about like a pelican-with-gastro at the sight of the first pothole.

Launcher tubes everywhere, across the back for the fishing rod, across the front for the “POWERWORX”, chargers for everything in a waterproof enclosure, powered by the double-joke- sized battery of the bike…

The rack on the back holds a 40l gearsack, with another bag strapped on top... tent and mattress.

No weight in the front here, which makes for truly adventures handling, as the 7.5hp donk below ain’t exactly “snappy”

Sure carves some beautiful, totally involuntary and random curves into ANY straight bit of road or track!!
Like on “Plain Jane”, the death-rattle of the front knobbie caressing the mudguard-stays looks after the audio-segment of the ride.


“Plain Jane” then….you know the details from the previous trip, only a set of Glen’s crashbar-mounted launcher-tubes were added….as said, GREAT food-storage, especially with a pair of forgotten last-weeks-socks, "and shit, they were wet when I threw them in there” in the bottom….even the carrots come out peeled and ready to use after a days worth of bone-crunching corrugation…

There ya go….no power, no brakes, no suspension….BUT LOTS of gear in the wrong places.

stewy said:
wheres the rest of the report

You mean this sorta stuff?
S


Hey I would never ever do that on the work postie

Can't wait for the rest of the report

Told you that bike had some HP Goodie, notice my foot over the rear brake pedal just in case it got outa control. Not likely eh!
That would be a shot out of Archer River Roadhouse, took me 3 goes to get that shot right.

The Garmin Zumo mounted on the bars looks a little outa place.

Got 2 Cape Posties back here now, went and picked up Rohan's ex today and gee they both look tired! Very tired.

This working for a living shit sucks, can we go again???? I'm not scared

Stromer said:
Hey I would never ever do that on the work postie

Can't wait for the rest of the report

Wait till I post up a bigger version of that shot....it's a CRACKA!!
Then all the details show as well, the folds and creases on that droopy right pannier-bag, the rope around the mirror stem and lots more....

loxsmith said:
Told you that bike had some HP Goodie, notice my foot over the rear brake pedal just in case it got outa control.


Got 2 Cape Posties back here now, went and picked up Rohan's ex today and gee they both look tired! Very tired.

This working for a living shit sucks, can we go again???? I'm not scared
Click to expand...

Told ya that bike's a balltearer

Got a good shot of Rohan too....leaning hard forward to hold the front down....wish I knew how to do that when I flipped it coming outta Gunshot

Sucking water on Battlecamp? Had a stick going through the crankcase during one of your little "side-excursions"??

Sooo.... you're already over the monkey-butt syndrome then...wanna do it all over again after SWEARING to never, ever climb onto another CT again....I know, that was 2 weeks ago

...and where the hell is that bloody pic-CD?
I wanna keep going here but your pics are missing!!!

glitch said:
...and where the hell is that bloody pic-CD?
I wanna keep going here but your pics are missing!!!
Click to expand...