Staff member
8 days of tears-in-your-eyes scenery and back roads that make the heart sing...8 days of wonder and stunning countryside that ONLY NZ can strut.

This time around it's the North...and Bernard (platypus) is there for the start....Hans (asphalt) is coming halfway around the globe from Vienna/ Austria for the 8 days of absolute riding bliss. Derek (Crusty) is along,...and the Tim-Twins-goodness of Sir Francis and TimC.

Throw Goodie into the mix and there's a bunch happily mutilating their arse-cheeks on a gaggle of DR650 seats for the sake of riding some of the best back-country lanes the North Island has to offer. Gobble some awesome local brew, knock the top off some noice Pinot Noir.... talk-shit and laugh their heads off 'til it hurts, slide and bop through the gravel berms... stay in some decidedly questionable digs and wonder about some 150year old pubs, getting a side-car ride in an Enfield to pick up the pizza...before adding a prime-quality shiner, fat lip and bruises all over.
Fugg me sideways...it sure wasn't boring....no, Sirr!!


Keep ya pics and bullshyte stories to yourselves. It's not that I / we are envious or anything, it's that we are so tired from enjoying ourselves riding unbelievable roads and tracks around Kinglake and Yea.

Well, I'm tired and I've gotta get some beauty sleep, and I've gotta keep fresh for a hard day tomorrow swapping ideas about lower speed timits, road humps and roundabout designs and other goodies with some friends from Yarra Ranges Shire.

Thought I'd stick to the old "keeping it civil" for the thread opener...but since you're insisting

One of the top-ranking attractions in NZ just have to be the roads themselves, and those of the North Island in particular.
Just imagine...the top20 Tassie-roads laid end-to-end, sprinkled liberally by a dozen Reefton Spurs or such...without as much as the white posts alongside!!! Over and over and over.....

No bloody roundabouts, no forest of signs... only clear views EVERYWHERE...no Armco, single or double-stacker...no cheesecutters, no roadmarkings, NO BLOODY CONTINUOUS WHITE LINES, NO DOUBLE-LINES!!!....just simply none of this endless Nanny-crap.
And since there's none of this, it also doesn't take the hordes of revenue-collectors to enforce all that "personal safety" bullshyte.

Overtake where you want and deem safe, through corners and all...just stick to the 100kmh limit (which, more often than not is pretty much pie-in-the-sky anyway on those roads) and if you get things wrong there's a decent chance of it having been the last time...the extreme terrain in many places and dense growth right up to the verge of the road make sure of that. Fugg up and you're compost.
Keeps 'em honest and inline...naturally and without an additional line, sign or other measure. Simple.


All that creates a pretty carefull and fairly "slow" average driver (by natural selection, I guess)....which leaves just that small extra space for a bike to not just enjoy all that's there, to the fullest

, but also allows for a decent crack at passing cars and trucks quickly and safely, rather than the Aussie-style "dodge-a-camera" drag-style overtaking of 101kmh versus 102.5kmh taking 5 kilometers of road for a passing move.

Just don't suggest that they pave more roads. We are loosing the dirt roads at a huge rate soon I'm going to have to go to the UN or somebody and complain that my social heritage is being crushed under asphalt. I might claim endangered species rights.
K

glitch said:
Then again....guess it ain't exactly traffic-planners paradise over there

Yes it is. They still employ road engineers who engineer rather than sit on safety committees.

K1W1 said:
Yes it is. They still employ road engineers who engineer rather than sit on safety committees.
Click to expand...

Just like the guys over here would prefer to do their work most likely, methinks.... there just seems to be a different attitude around, one that's highly refreshing to see the results of.


First, it was a “nice, little tootle”....8 days of cruising the North Island, trying to capture some of what I missed out on 2 years ago when the local quack stuck a last-minute spanner in the works and re-routed my NI trip for a week at Marooondah Hospital, ratz!

Then Hans (asphalt) from Vienna piped up.... Bernard wanted to come along for a couple of days at the start...and Tim (SF) didn’t fart about for long, raised the hand and put some curry on things...in the end, even Hakan, our brilliant bike-hire chief murmured something about coming along, possibly for a few days, show us some tracks, just for shits and giggles....as always with those trips, once word’s out, things tend to shake and move and take on their own momentum, leaving the initial plans in their wake.

Not that that’s a bad thing, mind you... 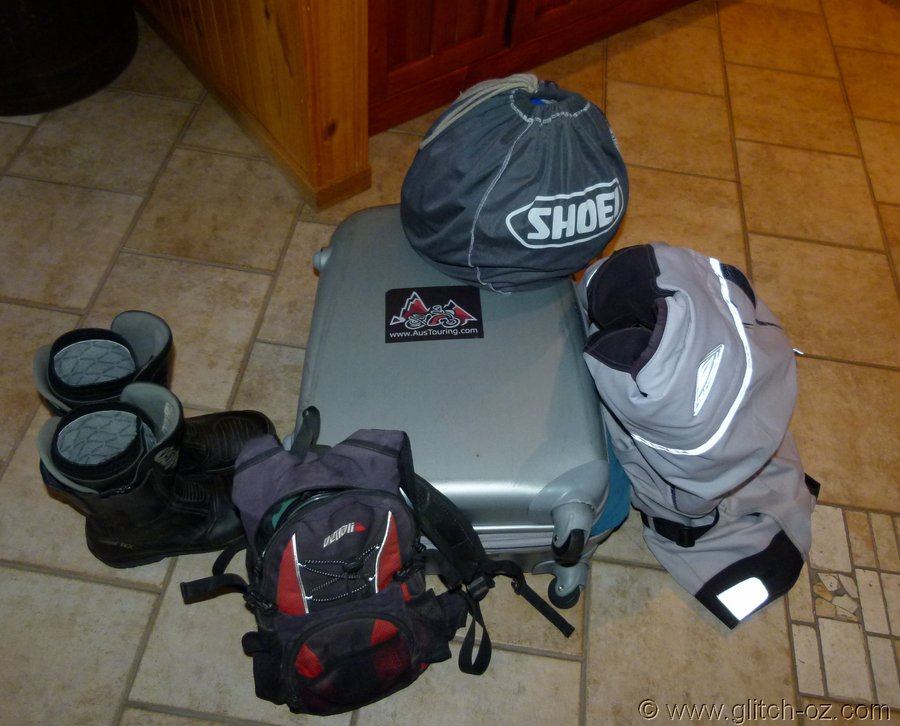 So....there’s Hans, happy to join for a lousy 8 days after a 30+ hr. flight from Europe, rearing to ride a 2500+km loop of the central North Island before another 30+hr. return flight via Seoul/ Korea....and he’s the senior of the whole bunch!!
THAT’S dedication, folks!! Hurray!! Committed to the cause... jox, sox and all!! :bow:

Due to the buildup of the whole thing, some of the DR650s were coming through Randal (who took over Ardmore Ducati Rentals a year or so ago), the other bikes were from Hakan, who’s also going to supply the fleet of chookies for the South Island Spectacular Mk2 next March from Christchurch.

And if he wouldn’t be busy with the World + NZ launch-logistics of the new BMW Water-Boxer, he’d be in that ride for a few days for sure.....aaarghhh, one of those days it’ll work out!!

And here it is, 8 days of absolutely exhilarating riding... plenty of gravel and other excitement, some miserable rain.... lots of sunshine and laughs ‘till it hurt, some unbelievable locals that made the whole affair a success...and an absolutely BRILLIANT crew that rode it all without a murmur of complaint... the BITING cold on some mornings, the drenching rain, some bottom-of-the-ladder facilities, the arse-on-the-floor mattresses and some questionable tucker.
Thanks for making it easy, guys...and thanks for those tears of laughter!!

Staff member
Bernard copped it badly on his way to Maraetai, the meeting point about 30 mins drive from the airport. 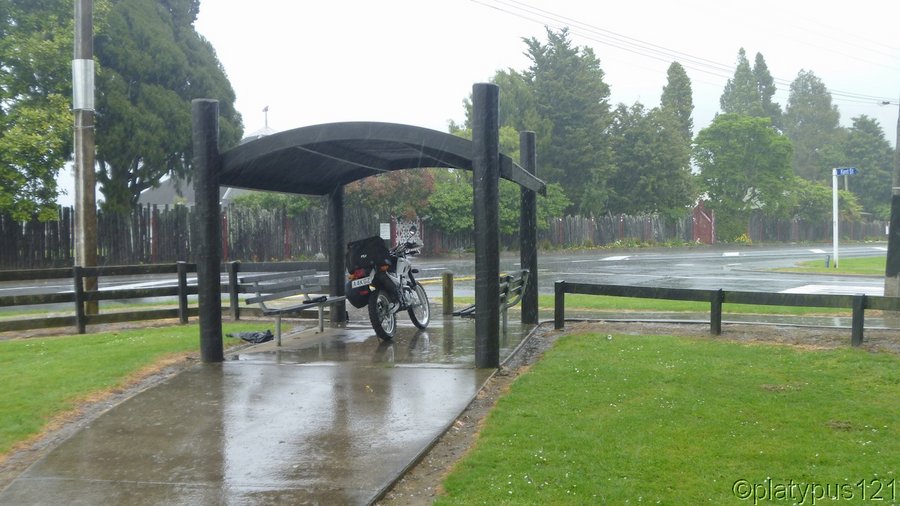 Big Kudos to Randal for picking us up, his van dragging the tail-pipe being jam-packed with a half-dozen AusTourers dressed in their various states of bike-clobber to hopefully circumvent the ~20kg baggage restrictions of international air travel....and all their gear, helmets, backpacks and suitcases.
He sorted the bikes quickly while morphing into party mode for the kids’ Halloween-do.
Somehow put on an extra 20kg, too... without all the fun of doing it slowly. 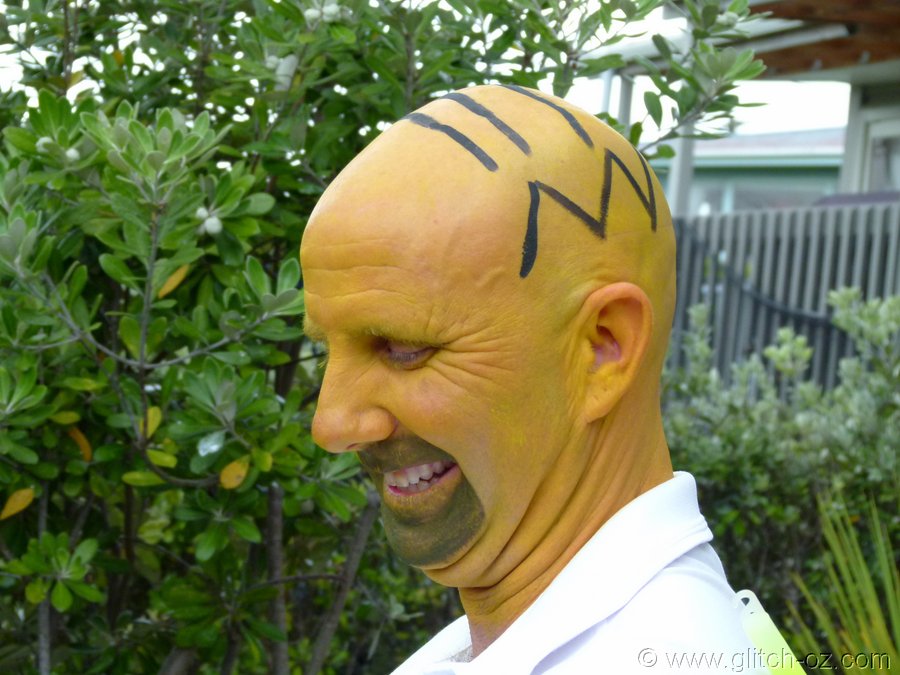 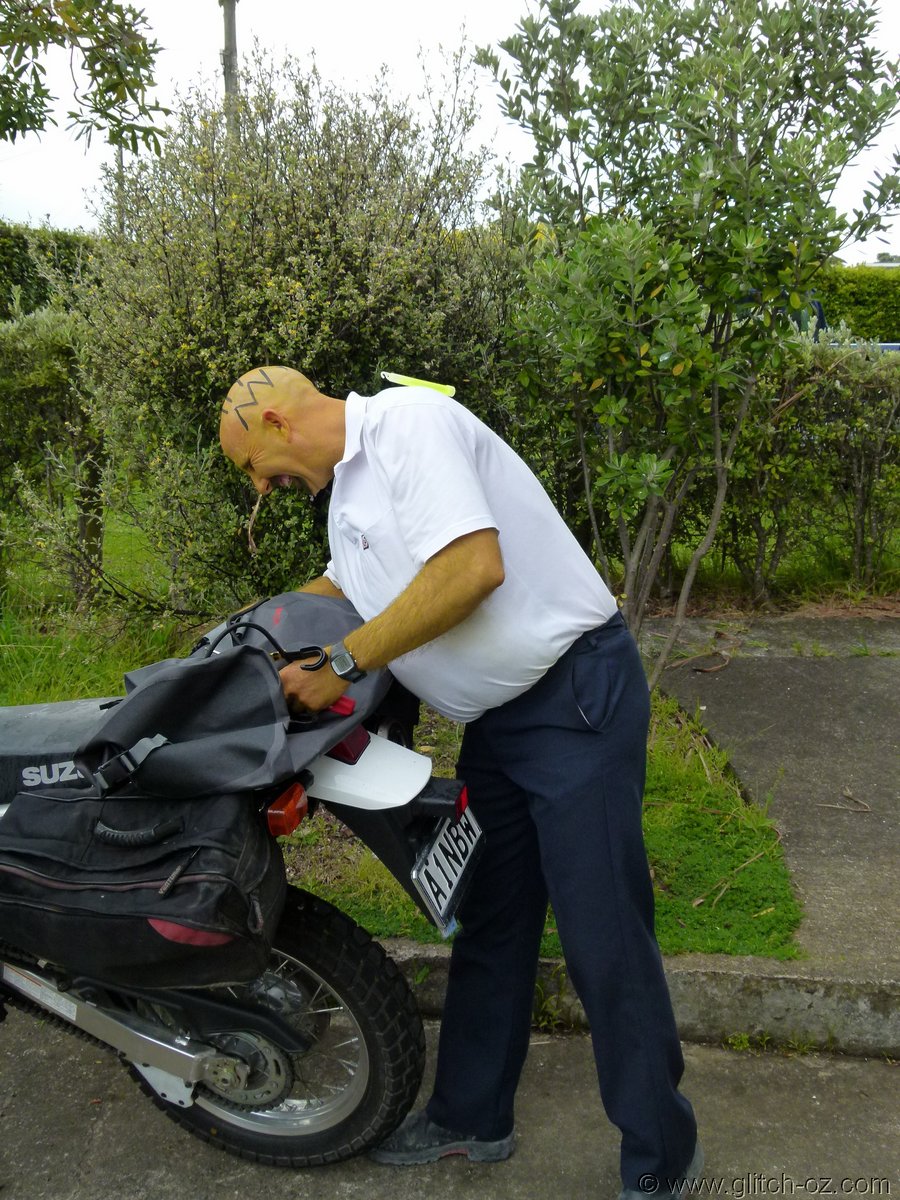 What a great set-up under the house....and there’s some decent riding kit for hire as well. 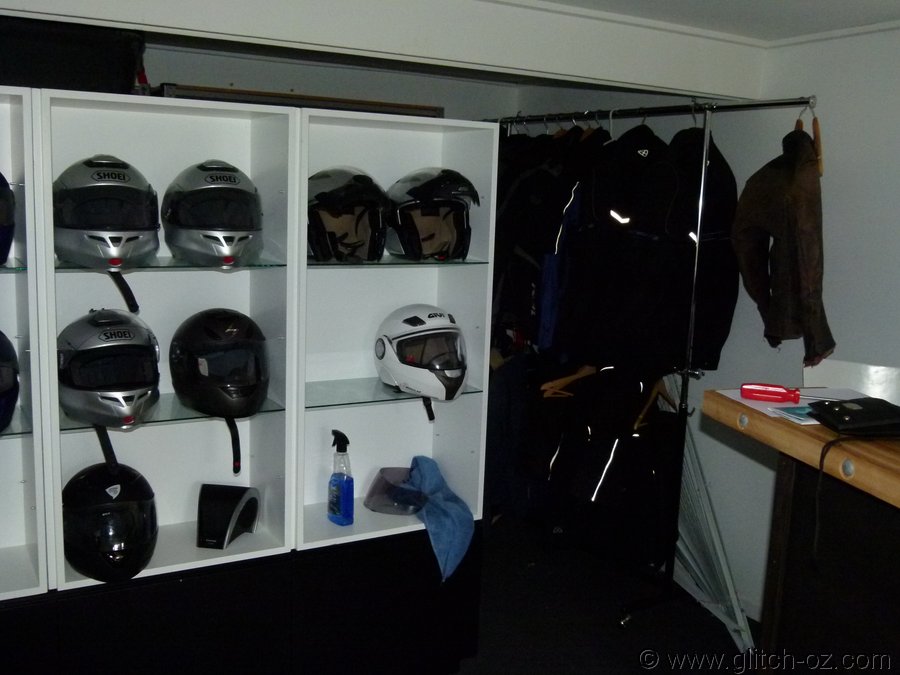 While walking the short way back to our first (and last) nights stay (also recommended by Randal), Chrissy’s and Shayne’s Gulf Retreat, 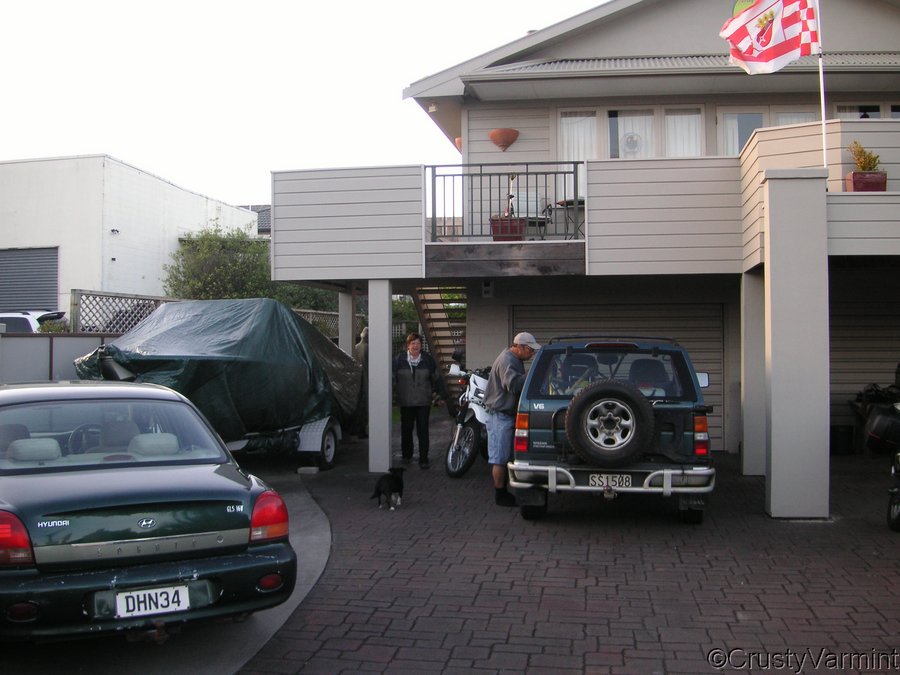 which pretty much set the bar for the incredibly friendly and helpful Kiwi hosts all along the way. A bloody good mob they are!! 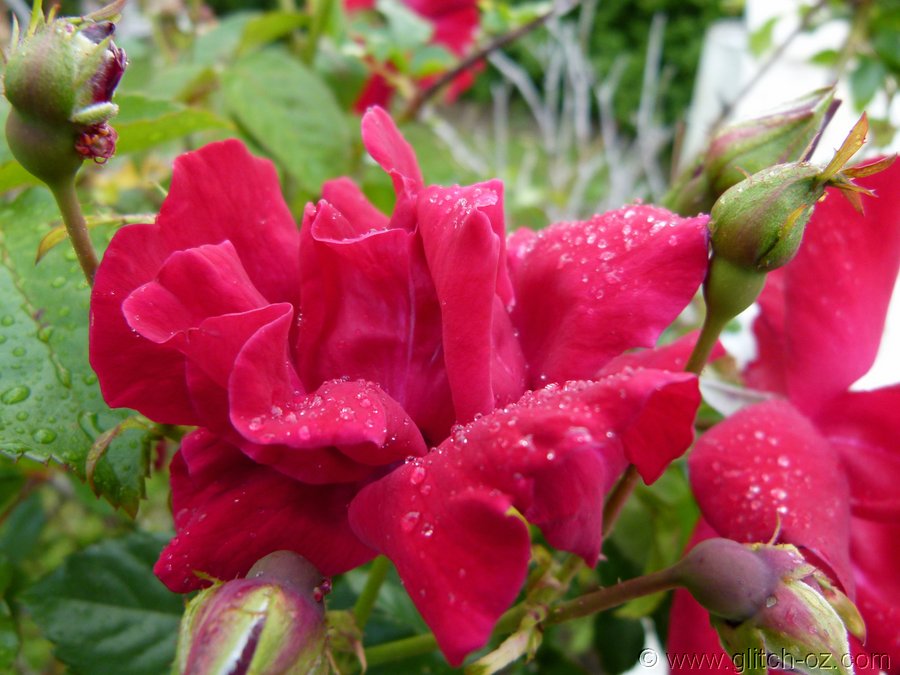 Hakan sorted the rest of the bikes quickly and all of a sudden we were by ourselves with a recommendation to stroll down to the foreshore to the Boat Club for dinner.
WhooHooo... what a place !!

The glass-cage dining room sits on long poles above the beach and quietly lapping waves, the views even more stunning than the tucker on offer.
Promised ourselves a repeat on our return straight away....thanks for the tip, Chrissy!! 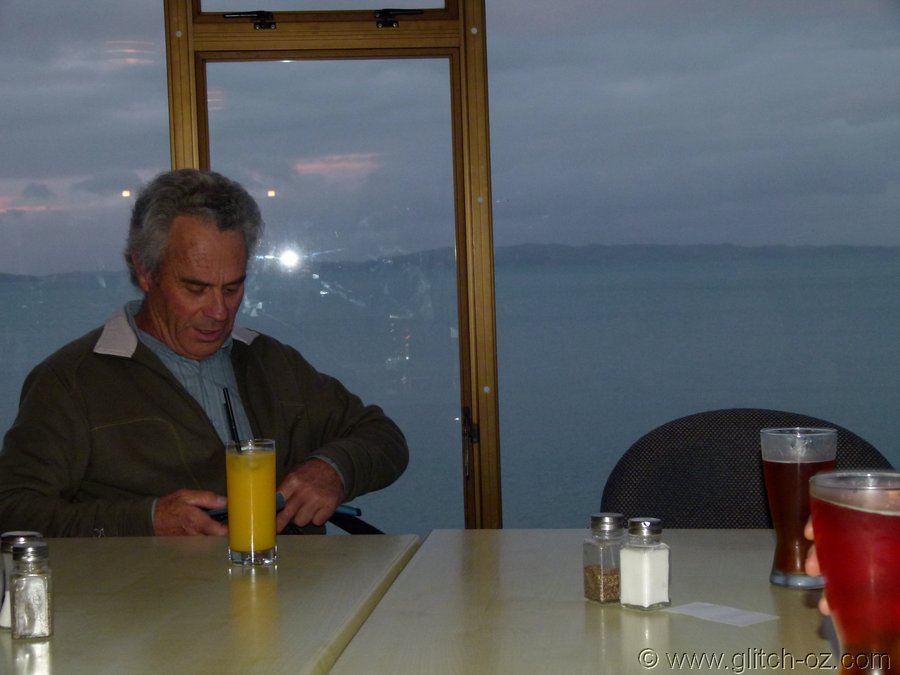 Crawling back up the hill with a full belly and some pint-pots of that benchmarking Monteith Dark giddying up the balance-works, it’s all sails set and trimmed, bikes sorted and packed, for a great start the next morning. 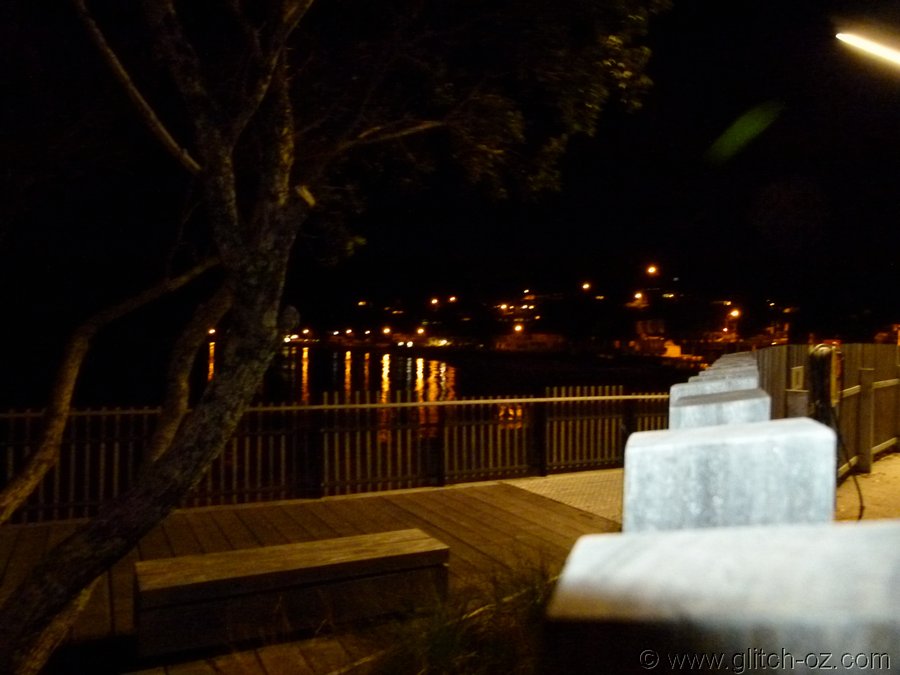 Staff member
The nervy electronic beep of the alarm is a relief, the last of the half-sleep burns off at the sight of the map. Yet another squiggly line in the middle of no-where... reasons enough to change the days’ route for some extra spice, running the ridges between Tuakau and Port Waikato rather than the main roads along the river. 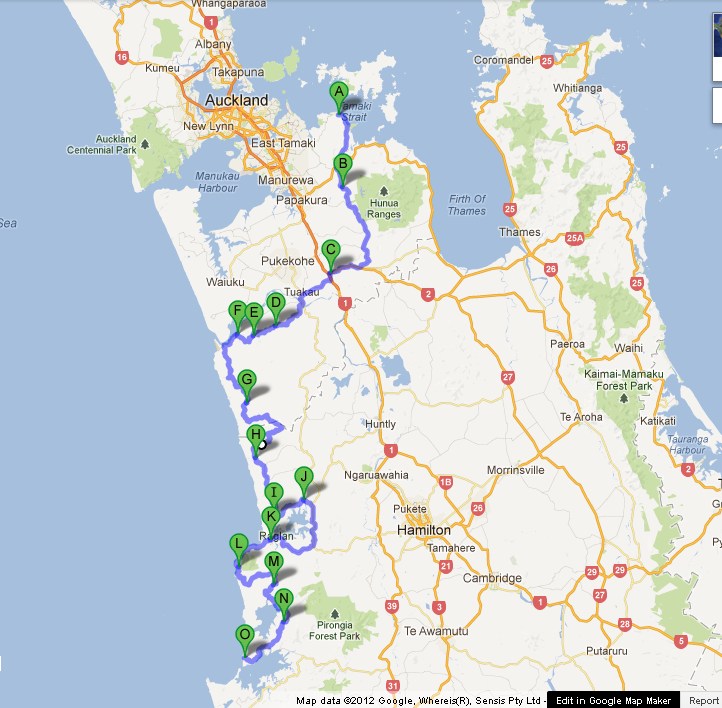 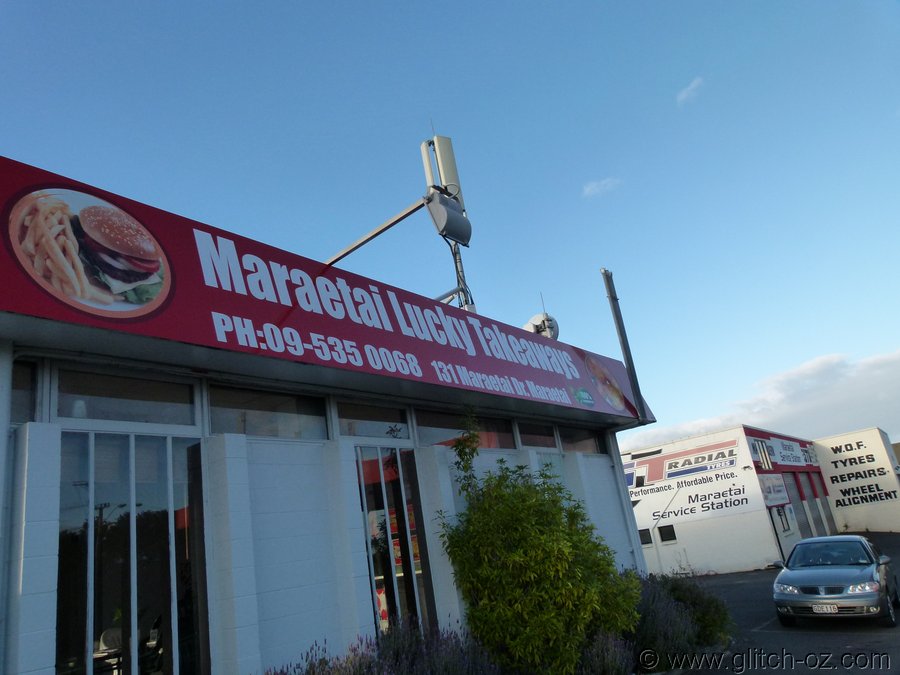 ..hmmmm...anyone fancy the squirts before even getting out of the gate properly?

Bernard gets us to Pokeno via some delicious warm-up twisties, just to get a little feel for the place. From here it’s west to the coast. 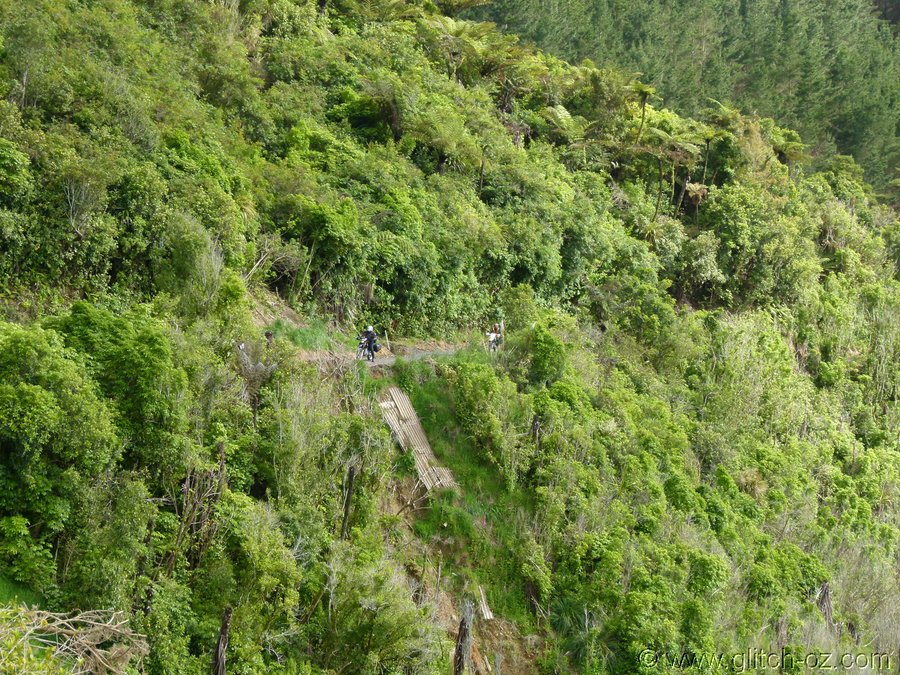 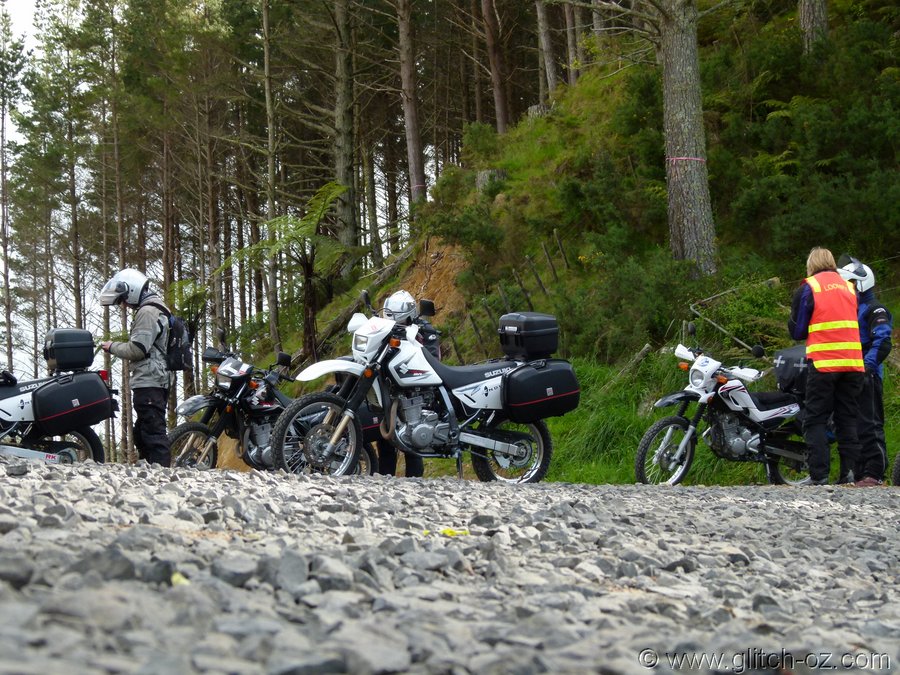 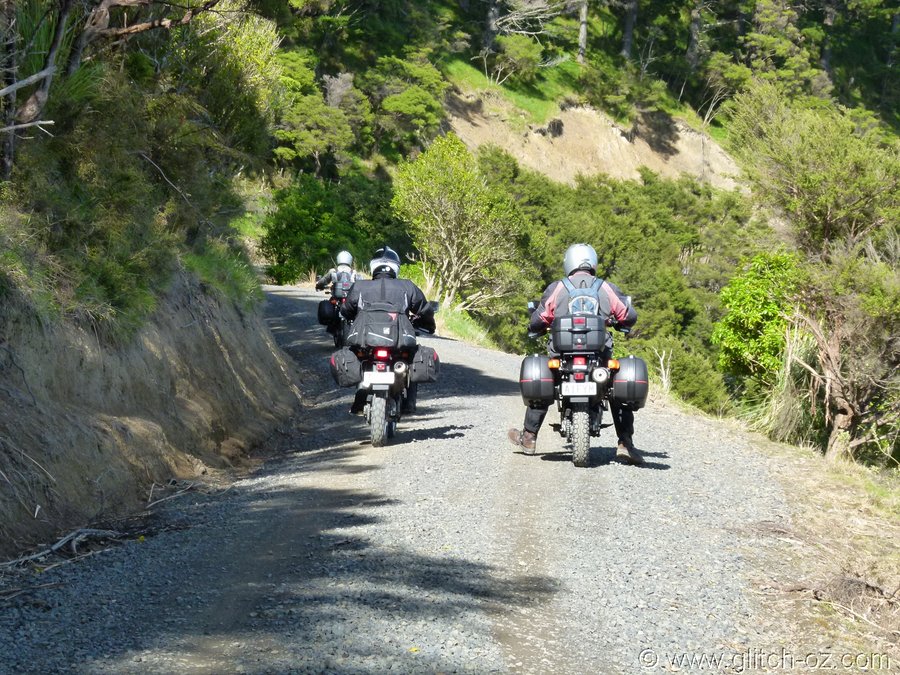 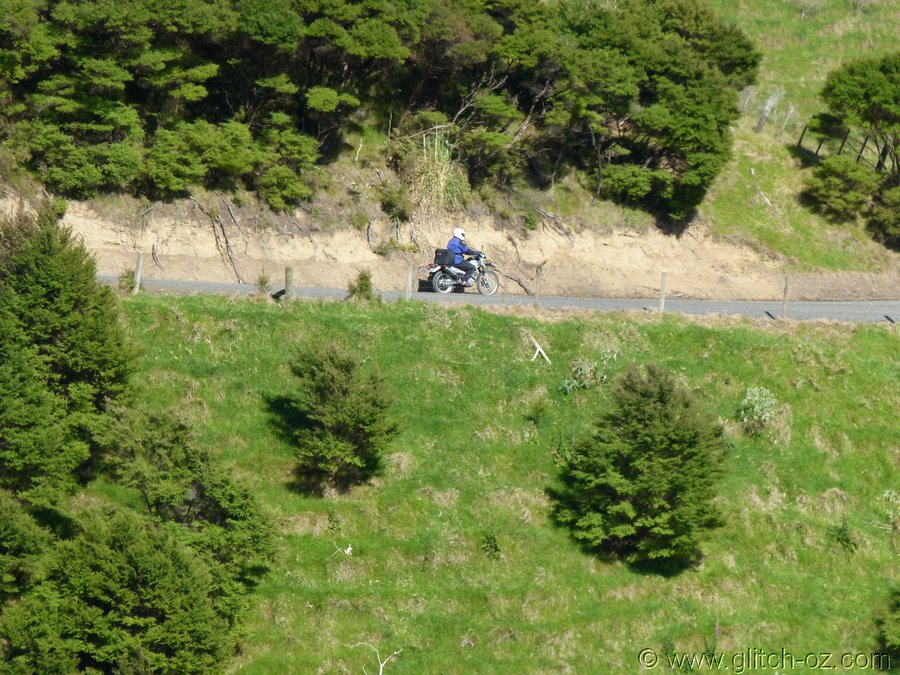 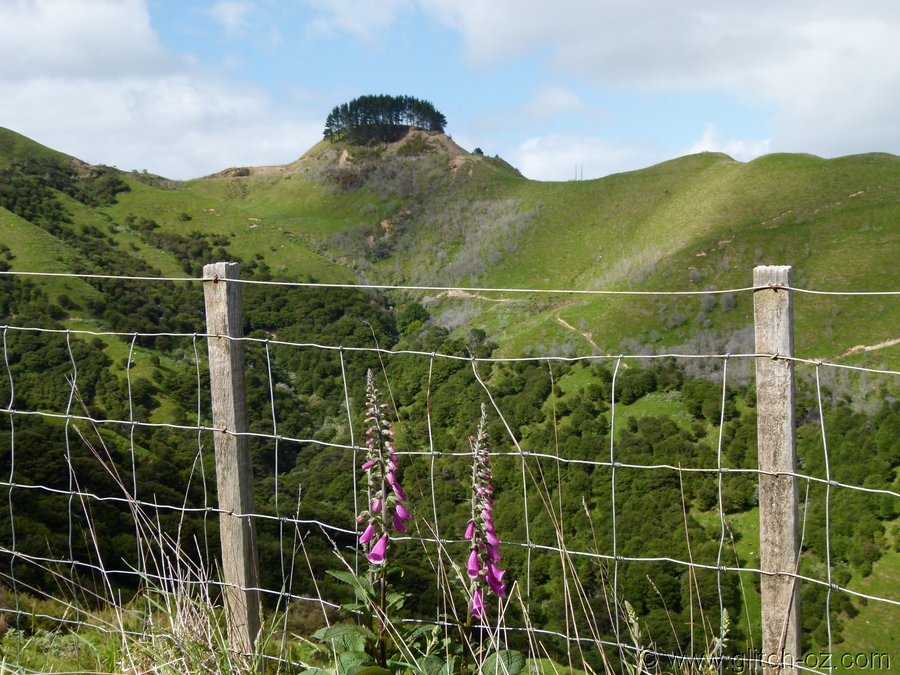 Crusty creeps into Port Waikato with no detectable pressure in the rear hoop and the friendly store-owner gets his little backyard-compressor going to offer help while we’re all silently praying that things are just a fluke and we don’t have to peel the rear wheel out of a bike to start fixing flats on day1....a big thanks to Hakan here, who also provided a set of spare tubes to take along.

Staff member
From here it’s south, running parallel to the coast on good gravel, most of it not too deep or coarse. 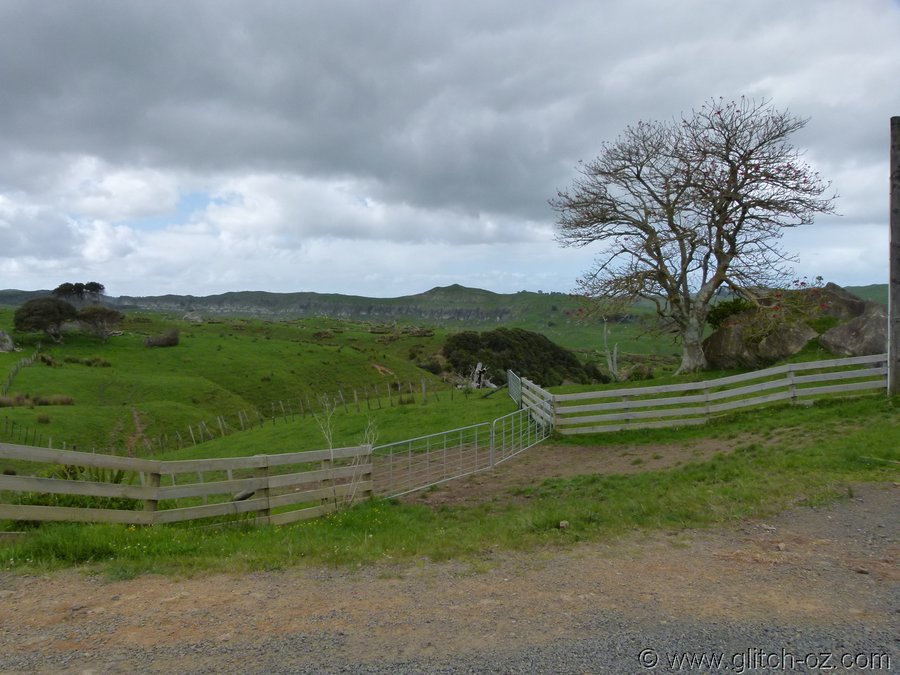 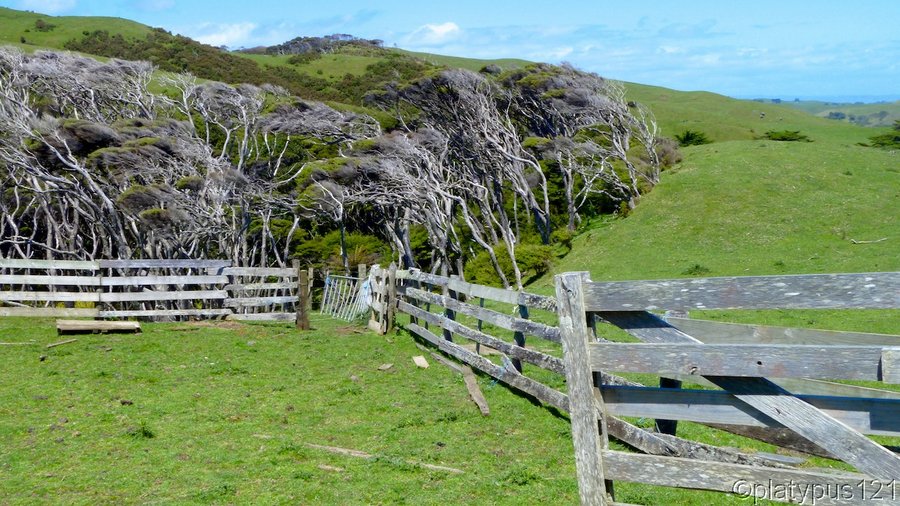 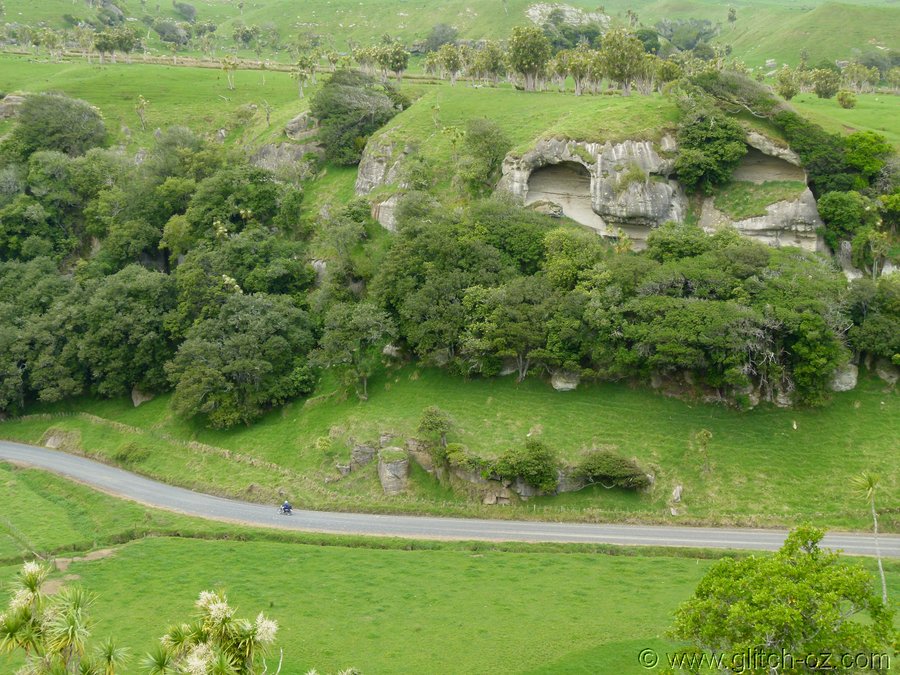 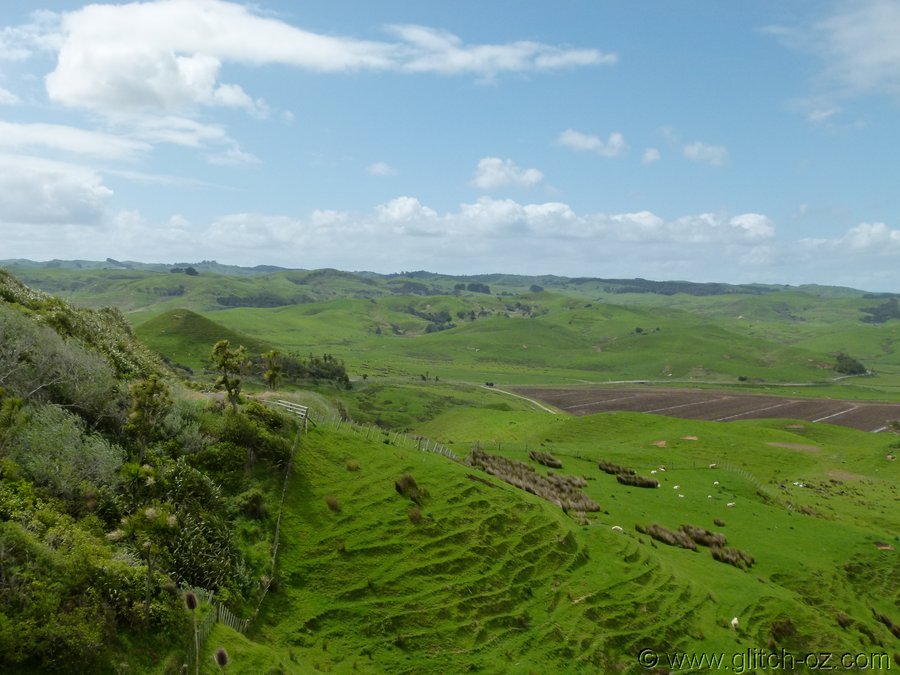 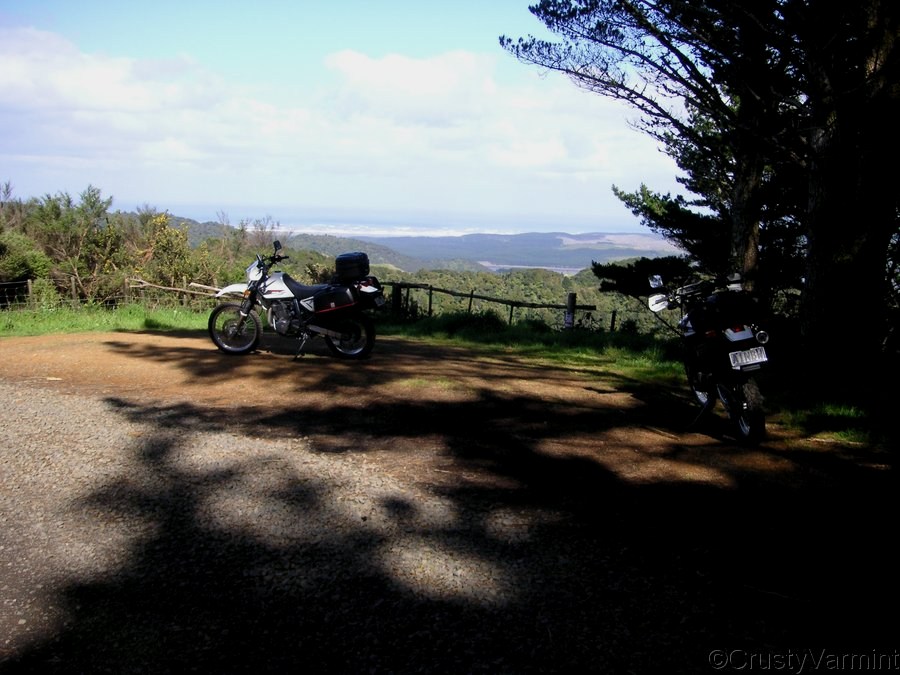