TimTim and Tassie-Dave had come up from Hobart....Tim (Gixx) brought his mate Clayton along.
"Straightline-Chris" on the ZX6 was there,
John Birrel on the R6 or 1?,
Sasha on the CBR6 at that time, dropping it in Bright at the bottleshop,
Stef, now on the Peg with my Flamethrower-pipe.
Twin-Esky Nigel from Ballarat and
Alex+Gail from Newcastle for a short stint.


After all those big rides, Suzie decked the Kwak just out of Bruthen after the first night...and never came back to bikes, AFAIK. 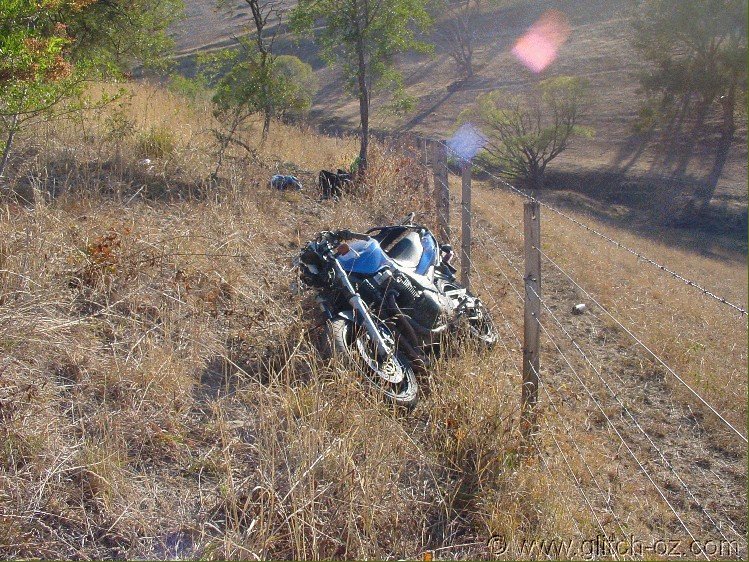 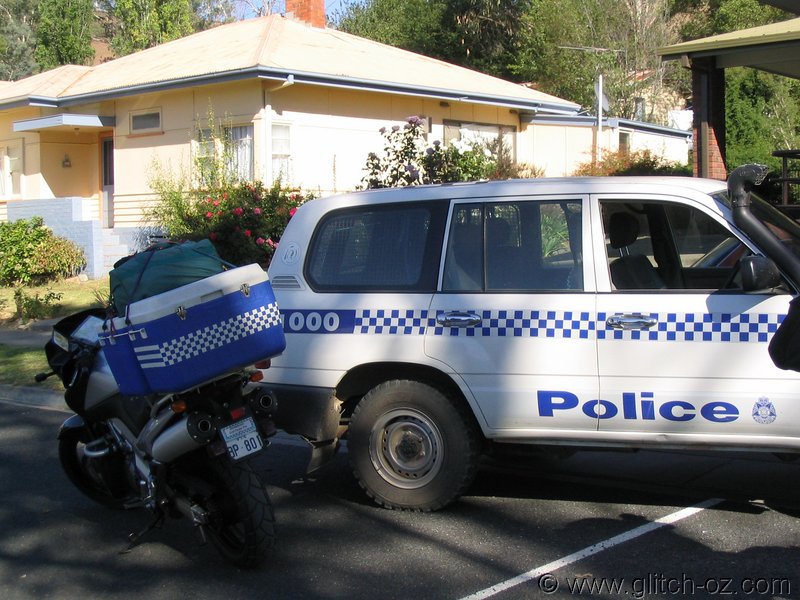 Tearing the house down in Jindabyne... 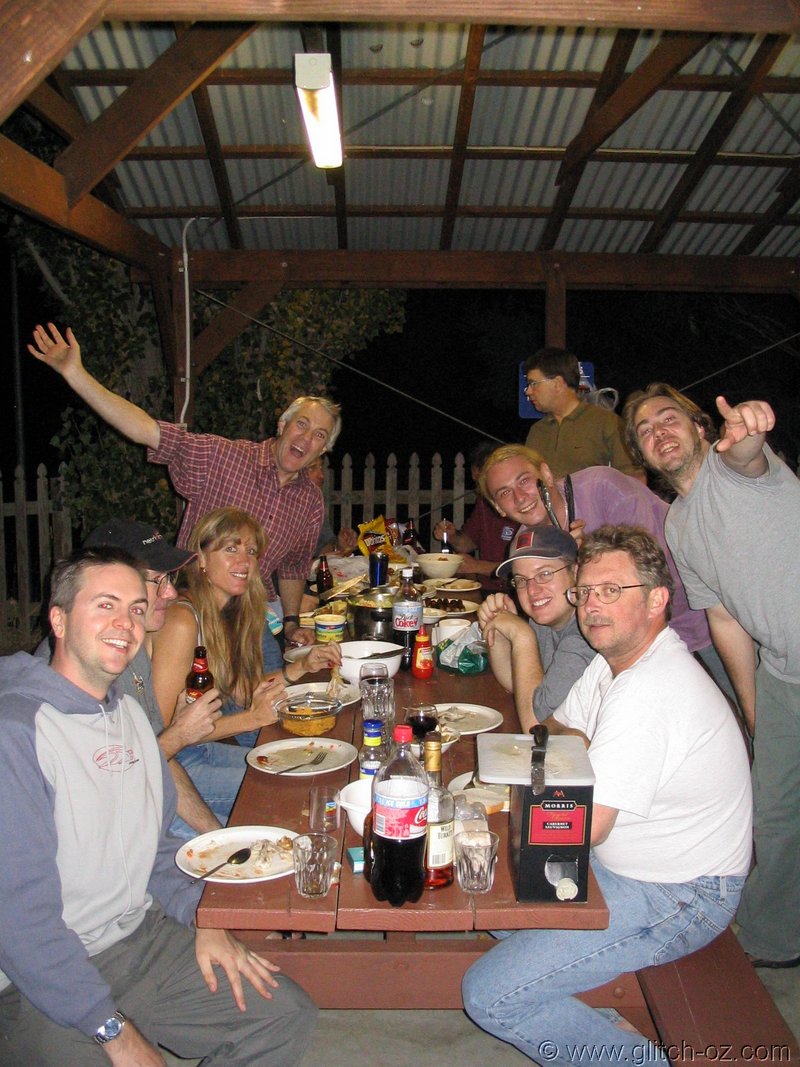 For the RR and pics, check this:
http://www.austouring.com/forum/showthread.php?t=784


A weekend ride that nobody wanted to come along for...too cold, too wet.
Bugger it, we'll go. 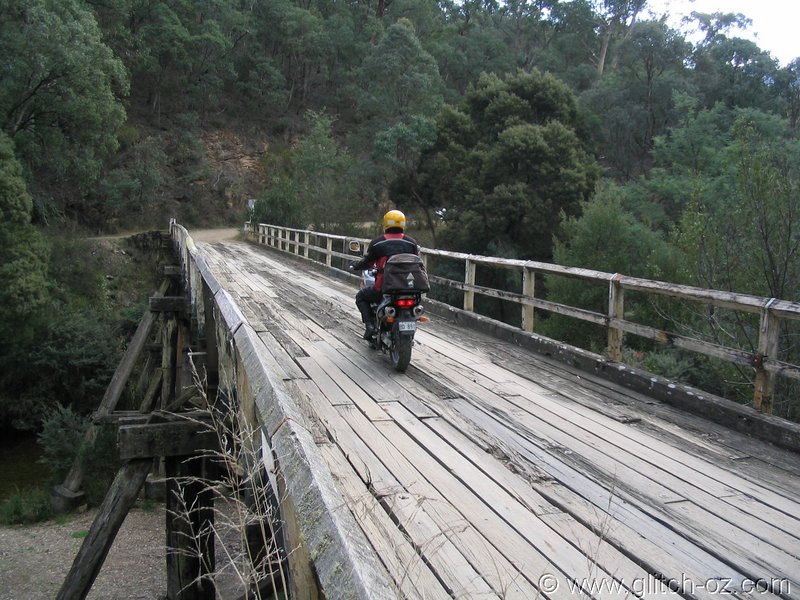 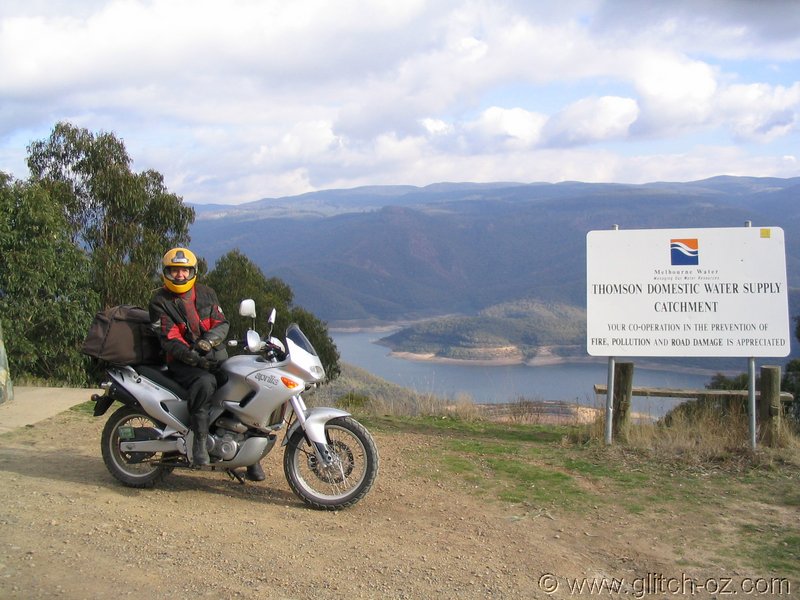 Sliding down the wet and deep clay-hill into Woods Point became unforgettable...
hang on and pray stuff.


The Miner's Cottages in Jamieson proved to be freezers despite the open fires. 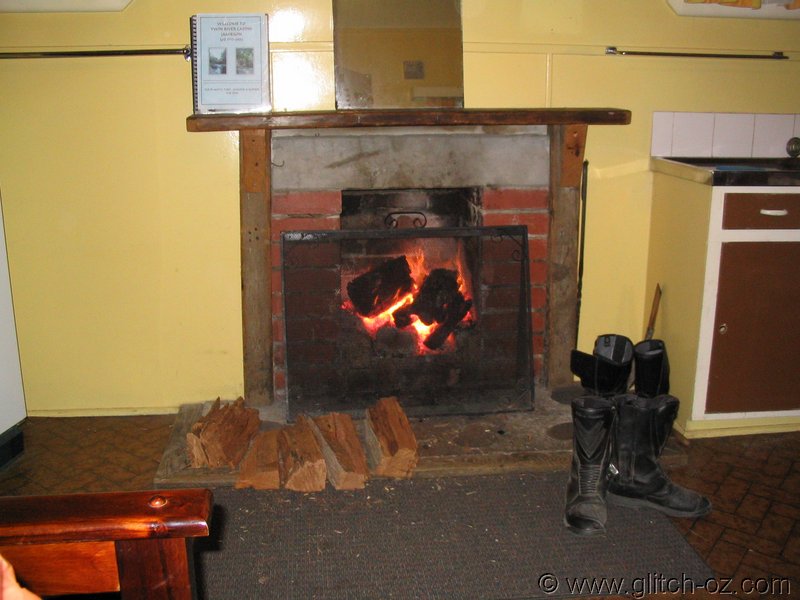 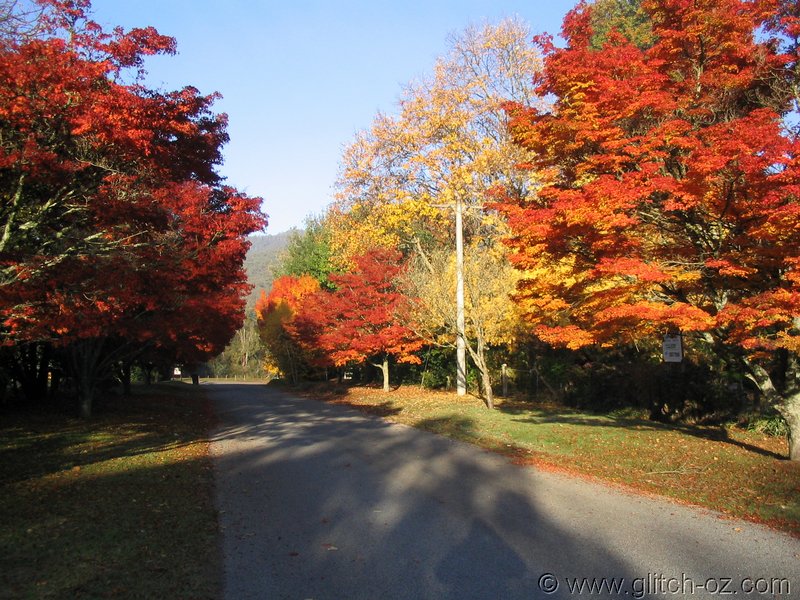 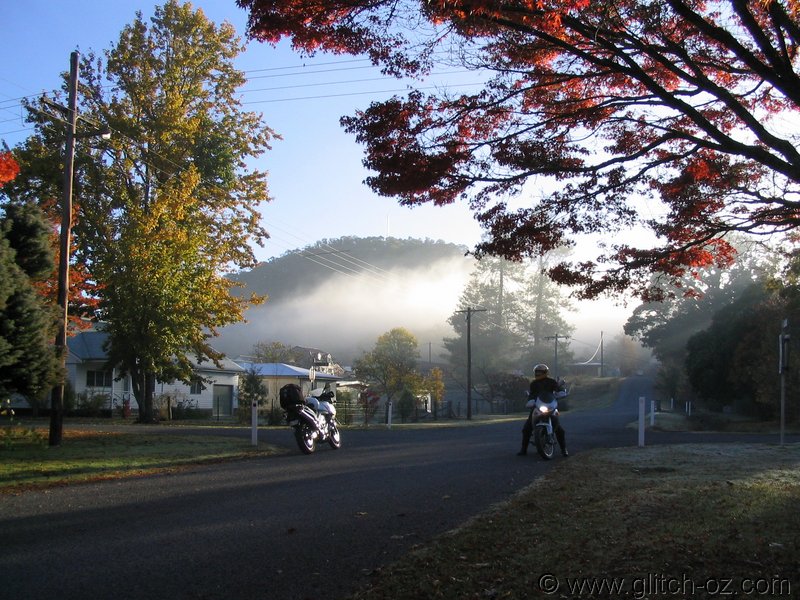 Somewhere on the Skyline Rd. 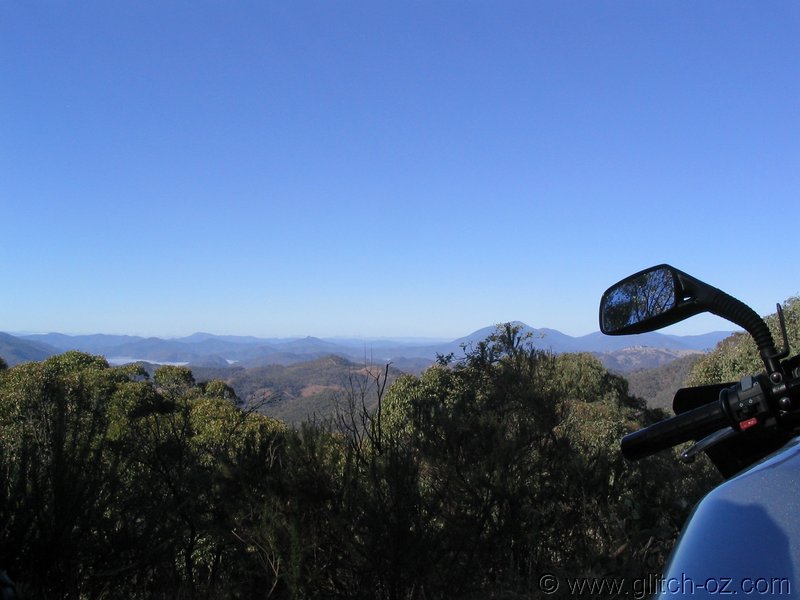 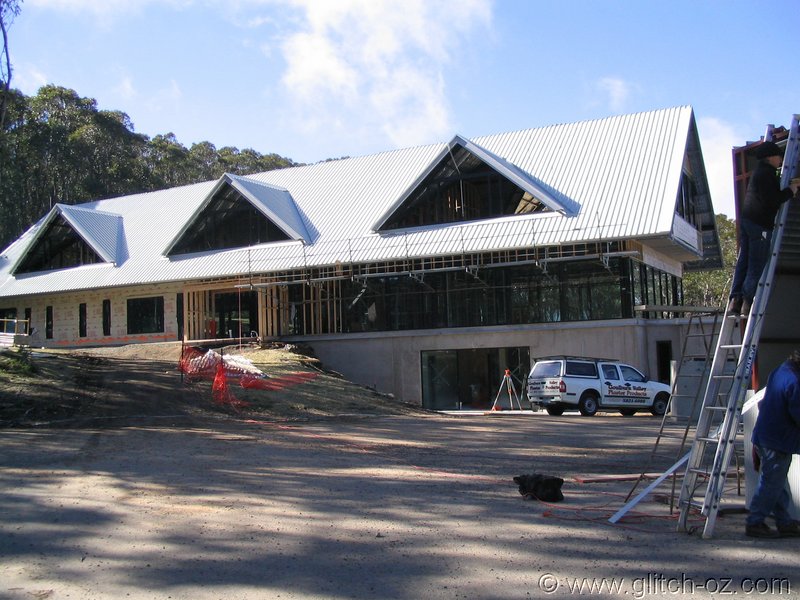 Bloody cracker of a weekend 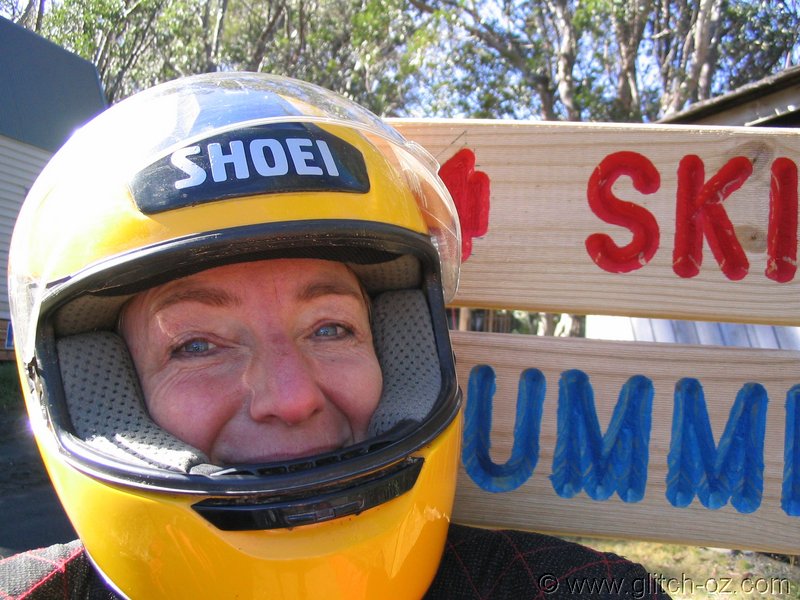 Building on the previous, local rides, this one took things to a whole different level ...and "went international".

A REAL BIGGIE, being away for 5 weeks with a solid 31 days on the road.

Shipped the bikes to Christchurch, looped the South Island... then another, smaller loop of the North as far up as Rotorua.

Jimbo, then still living on Hawaii, came across for that one "but I can only make it for a fortnight, definitely no longer, and that's bloody stretching it".

It all started with the most hilarious roadworthy inspection ever experienced....yes, EXPERIENCED!.... (or WoF-check, as known locally)...

L-R:
Yours truly.... Sasha (now on the red Guzzi Breva).... the empty chair was a placeholder for Moira, Nigel's Better Half and their son Billy-The-Kid, coming along for the first 2 weeks in a hire-cage....Nigel, of twin-esky V-Strom fame on the BananaRama....Jimbo (forum-nick "Dusty") on a hired Wee-Strom...Tim ("Tim") on the KiloGixx...John Birrel, the other iron-butt on a sporty and his trusty R1....and Goodie took the shot.

This trip was also the start of a more concious effort by all to get some better quality shots....and it shows.

From "shooting stars" at a pebbly beach near Greymouth...

...the spectacular coast and hinterland of Karamea...

...which brought up serious thoughts of investing in a local piece of "winter-clothing"...

...an early morning run into Milford...

Nobody will ever forget the run up Lake Pukaki towards the Ice-Giants of Mt. Cook

...or the longest place-name in NZ, a tiny place in the backblocks of Hastings...(shoulda seen the postcode !!!!!!)

....and unreal roads and landscapes around the Eastern Cape.

Some Blackwater Rafting in the caves of Waitmono was yet another kick in a loooong line of highlights...

Across the Lewis Pass, chasing down a cop for some fun!!! (unknowingly)

Finishing it all on the Banks Peninsula.

For all the yarns and pics of a truly stunning 5 weeks...start here!
http://www.austouring.com/forum/showthread.php?t=802

It's a 6-part story, links to the next/ previous chapters are in the posts.

BLOODY AWESOME TRIP THAT WAS!!!

Oh....and Jimbo??
He finished up extending his time twice, re-booking and re-scheduling return flights and bike-hire etc....until the Bike-Hire absolutely NEEDED that Strom again and said : "NO" to yet another extension.

Typing this "#1, #2..." it sometimes feels like all of those rides were "designed as mini-series", sequelled, pre-designed etc....they weren't!

It just happened to morph that way whenever another ride into the same general area was "hitting the boards".

Still riding the incredible buzz of the NZ-trip, it just HAD to be another 'southern island" and when the call went out. they came 'in droves".

A fairly big group this time around....and the infamous "bowling-shirts" put the Tassie-Gems into the history books for good.

Let's try to get them all together....there was Garry on the Peg....Loz on the Hornet9...Matt232 on the Blade (that years later turned into Tim's) after he decked it on the Whitfield Rd....Guenther (gunner) now on the only metallic-grey Vee in Oz, which later turned into the very first WTF...Nev on the Kwaka ZX12 busting the radiator on the Strathgordon Rd..... Jo on the F650GS (or was it still the Scarver?)....Goodie on the Peg...Jason still on the Viffer, I think....and Deano on the black VTRthou...Andrew?? on the yellow SV...Tim on the KiloGixx...Marty on the VEE...Karel (carver) on the VEE...myself on the VEE....Sasha on the Guzzi or the Hyundai??...Tassie-Dave on the Tiger and TimTim on the CapoNord joined in for a couple of days...man, it was quite a sight on the road.


The group split on some days....the "Pigs" did the Western Explorer and Jacobs Ladder/ Ben Lomond and a few other gravel roads.
Guenther's Strom blew the intake-boot off the throttle body in the bush above Upper Blessington.
For once, nobody decked it on a "NetRider-ride"

Loz on the Strathgordon Rd.

The patch coming loose on Nev's ZX12 after a stone had punctured it. Got him into Hobart, though.

Under the belly of the Hornet

Guenther and Deano on the Mt. Wellington Rd.

Dinner in ...??? Where the hell was it? (Last night somewhere up the North Coast)

Man, it was stupid fun!!

The RR is a bit of a disjointed effort now, with Marty's pics missing in the first part as his site is offline or the folders deleted.... Loz never added pics in the first place, some overlapping bits and days....I'll post the links to both parts here.


glitch said:
Tassie Gems also turned into the last "NetRider-Forum" ride.
By the time the RideReport was written (originally started by Loz) AusTouring was only a few weeks away.
Click to expand...

Ahh I remember that one well. I decked my ZX12R less than a week before departure date and had to get it patched up to make it rideable. From memory it just needed some gaffer tape to stop fairing flapping a new clutch cover and I took off the damaged helibars and put the stock bars back on. The bike matched the rider because I was nursing a few cracked ribs all through the trip. Reported the accident but made up some excuse to stall the insurance assessor from viewing the bike before the trip and when we got back 3000km later the bike was assessed and the insurance company wrote it off.

All guys on REAL BIKES back then, not those wannabe, tiddly, dinkytoy-WEEs pffft:flame::flame:

nev said:
I decked my ZX12R less than a week before departure .....
nursing a few cracked ribs all through the trip.
Click to expand...

What came next?
Not the Strom yet? Wasn't there another Kwaka in between?

Only got a few pics of this one and can't even remember it.

No idea who else was along....but here's Goodie (Eggnogg, 'cause of the yellow helmet, panniers on the bike...which looks narrow enough to be a Peg.) 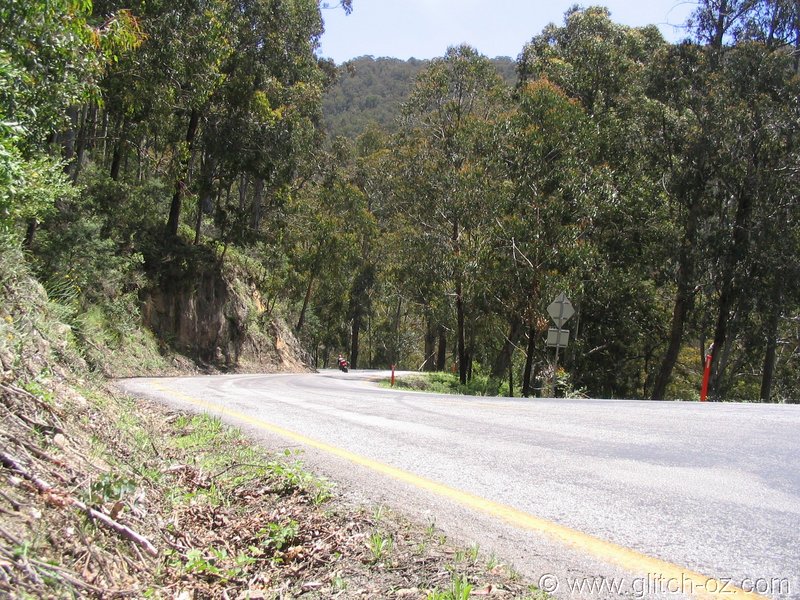 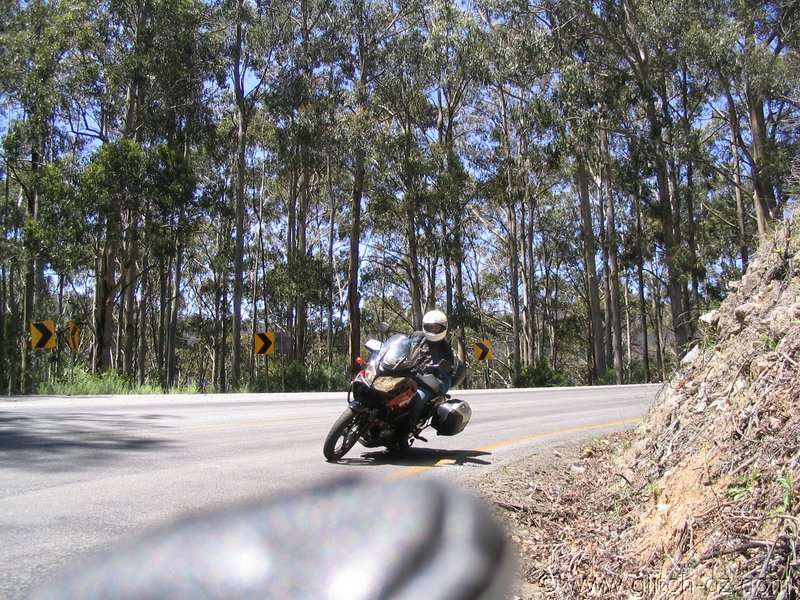 Marty...and that looks pretty much like the Cabramurra-Khancoban Rd. near the Tooma Reservoir, one of the last bends on the eastern side of the dam wall. 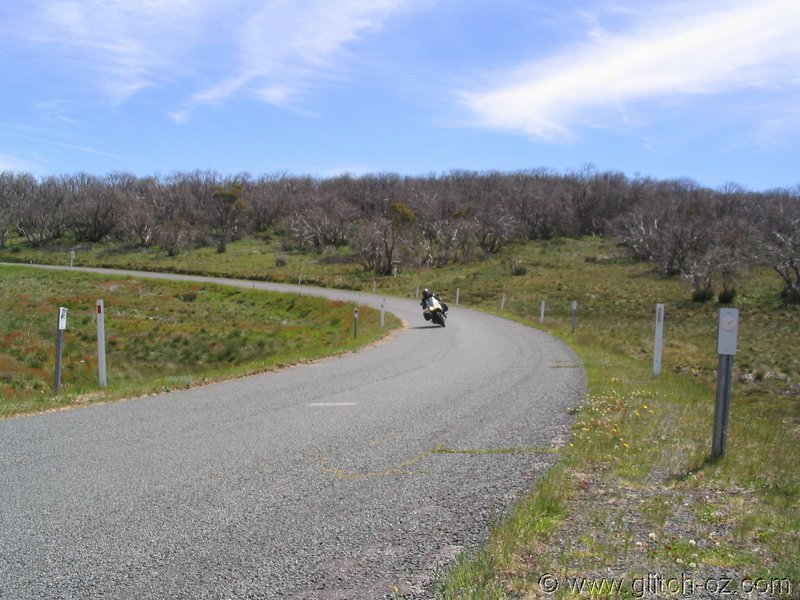 And Sasha on the Guzzi? 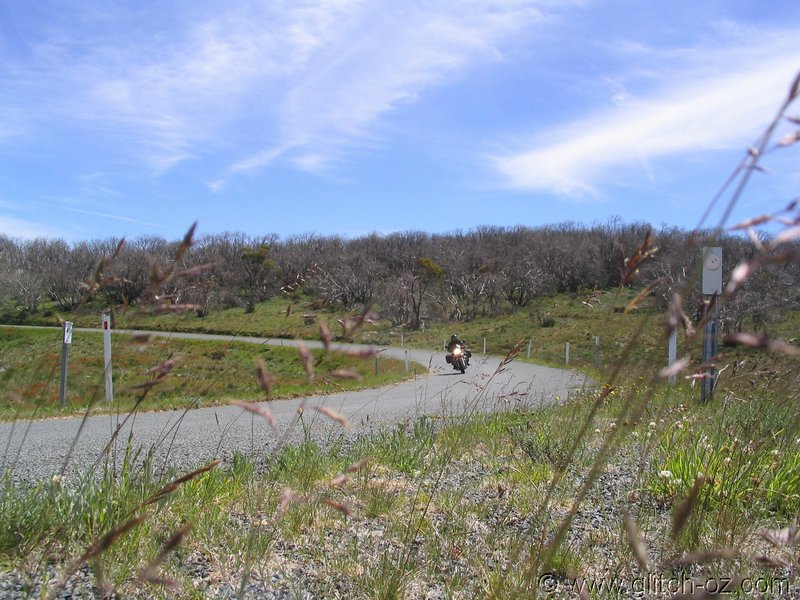 Perhaps someone else can comment with more details...according to file dates, it would've been between X-mas and New Year.

Going by the bikes...L to R : Karel.... yours truly.... a mate of Karel's on Karels old 250 (forgot the name)...mmmmm, oh yeah, John's FJR which he bought after falling off the Strom because it was too high, then fell off the FJR because it was too heavy...and Goodie's Peg. 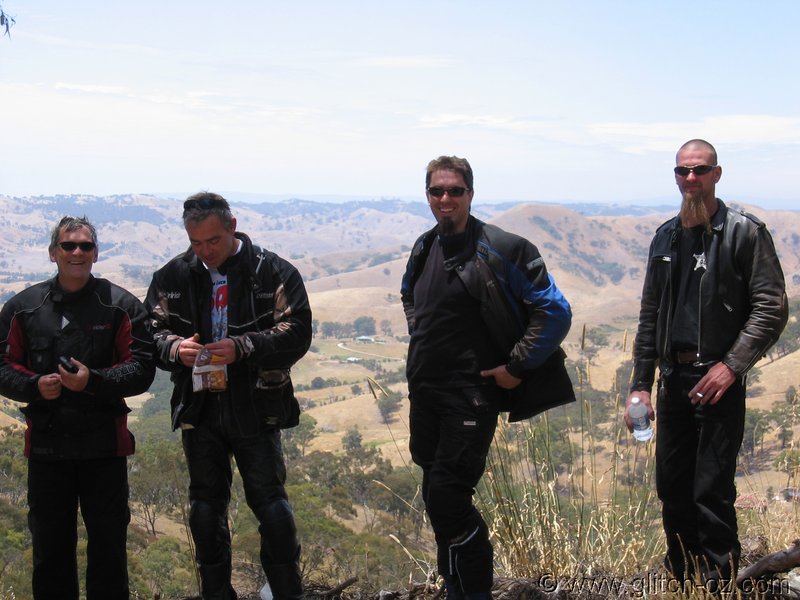