Tornanti_2...Three Weeks Of Carve Till Ya Barf!!


The Panoramica delle Vette is now paved only.
Click to expand... 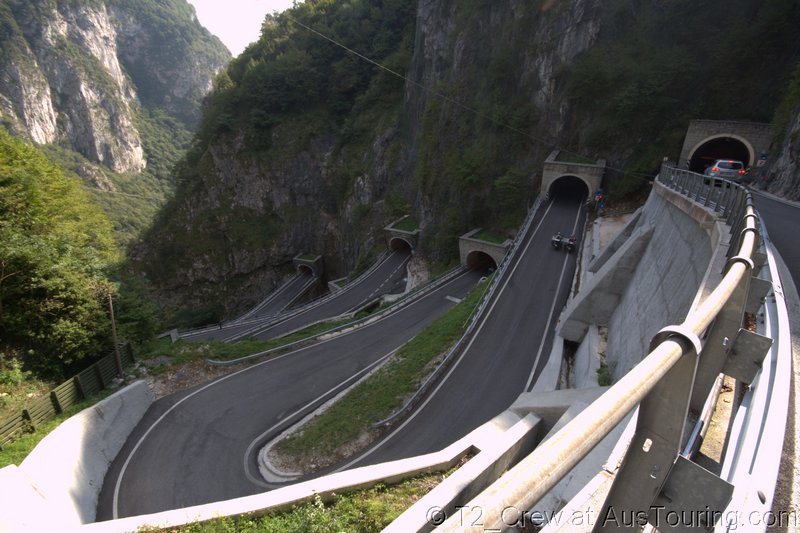 
The Panoramica delle Vette is now paved only.
The reason is the next Giro d'Italia in May 2011oo:
Click to expand...

There goes another one of those exceptional rides of this world.
I'm so glad to have ridden the real Panoramica.

"Progress" can be a cruel thing, fark it!!

Sorry, Hytram,
they can :bang:
Sella Monte Zoncolan was paved because of the Giro d'Italia

glitch said:
Arghhh, shit!!
I'm so glad to have ridden the real Panoramica.
Click to expand...

Yeah, sadly it's getting less and less....all around the globe.:flame:

OK, It's taken a while, but I finally got round to sorting out my GPS tracks from Tornanti2

The first one is here W20090923GasthofMariandlToBovec.kml

If you have Google Earth installed, and open the file in the link, you'll see a display of the route that day. If you select the track element that has the date in it, you can click the little play button below it and 'fly' along the route.

Be aware, I recorded these tracks on a GPS-equipped phone. It ssometimes had a less than optimal signal when under trees, in tunnels, or in deep valleys, so it sometimes sseems we went haring off cross-country.

The easiest way to follow is to use the keyboard controls (muck around with arrow keys, shift-arrow and page-up/down to get most of the movement you need. The adventurous might want to fire up the Google earth flight sim, but I just keep crashing it.